No doubt, the dressing sense of a person is the reflection of his or her personality. Indeed, a great dressing style enhances the overall look the same way a spice adds flavour to the food. The famous character from Schitt’s creek, the ultra-glamorous Moira Rose, believes in the same philosophy. Her style and elegance can blow anyone. Here, take a look at her best top 10 looks from the famous Canadian series ‘Schitt’s Creek’. 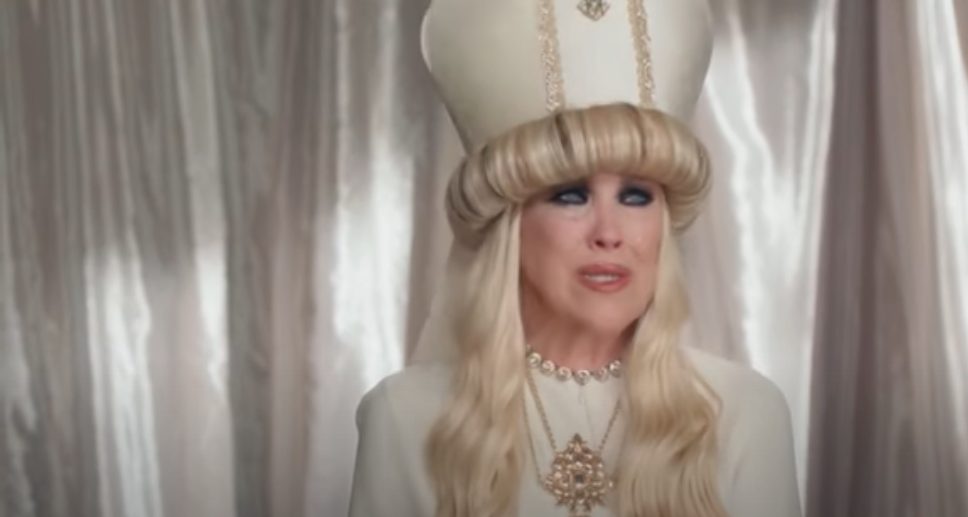 Moira Rose was looking like a goddess in the white flared gown along with a sparkling big pope hat which somewhat looks similar to the ancient Egyptian princess’ outfit.

She wore the golden metallic dress carried with red lipstick and a side neck bow tie during the announcement of town council candidates.

This was the ultimate bossy look of Moira Rose during the final episode with a stylish black neck bow which was giving a sheer look to the whole outfit.

She wore this dress during the episode-6 of season-2 for a town council meeting. Her silver space suit like dress along with a black terra waist belt was giving a charismatic and magnetic look.

This glittery sequin dress was giving her a sparky and airy look which she wore during the ‘housewarming’ episode.

6. Black Dress with a Crow Hat

This black full-sleeve flare dress with a crow hat and black wired stocking was an amazing combo.

She wore this all blacktop and pant dress with a silver neckpiece and metallic waist belt during episode-3 of season-2. The main highlight of the outfit was the brisk black-beret which she carried with full grace.

This full-length leather hoody-dress accustomed to a beautiful silver necklace along with her curly blonde hair was giving her a vibrant look.

This classy belted printed-suit with a wire bow along with black strip stilettos was giving her a very refined look.

The black-white zebra bodycon with red lipstick during the episode-2 of season-4 was one of her best high-fashion outfits.

Pursuing her doctorate studies, Swati always looks for unexplored potential in different genres and love to pen down her thoughts. She also enjoys reading about gadgets, technologies, historical art and culture.