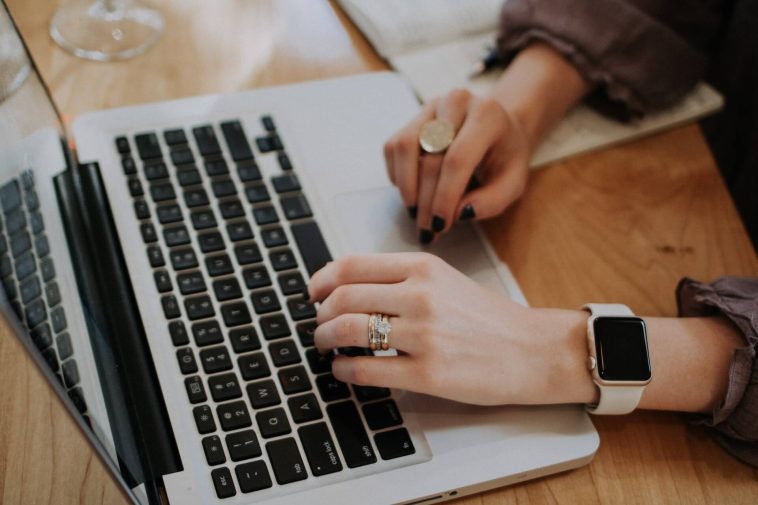 Photo by Christin Hume on Unsplash

The below listed encompasses major technology updates that happened this week. Without delaying further, let’s catch up with this week’s technology news for women that include Vivo Y21e, Samsung Galaxy Tab A8, OnePlus 9RT, Boult Audio AirBass Y1 TWS Earbuds and more.

1. Oppo A16K with 3GB RAM and MediaTek Helio G35 SoC has been released in India

The Oppo A16K has a waterdrop-style display notch and is powered by a MediaTek Helio G35 octa-core processor. FlexDrop, Three-finger Translate, and Freeform Screenshot are among the smartphone’s preinstalled features. It also boasts splash protection thanks to the IPX4 design, as well as a graphite sheet to prevent overheating, according to the company. The Oppo A16K pricing in India is Rs. 10,490 for the single 3GB RAM + 32GB storage option, which is available in Black, Blue, and White.

2. The Tecno Pop 5 LTE with a 5,000mAh battery and 14 regional language support was released in India

Get set to #PopAheadInLife with POP 5 series, with its amazing features.

The Tecno Pop 5 LTE, the latest edition of the company’s Pop Series, was released in India on Wednesday. The smartphone has a 5,000mAh battery and a 6.52-inch display, as well as 14 regional language compatibility. The Tecno smartphone has twin back cameras, one with an 8-megapixel primary sensor and the other with a 5-megapixel secondary sensor. The Tecno Pop 5 LTE pricing in India has been set at Rs. 6,299, and the phone will be available starting January 16 on Amazon India. Deepsea Luster, Ice Blue, and Turquoise Cyan are the colours offered for the Tecno phone.

On Friday, January 14, the OnePlus 9RT was unveiled in India at the company’s Winter Edition Launch event. The Qualcomm Snapdragon 888 SoC powers the OnePlus 9RT, which also has a 50-megapixel triple rear camera array. A 6.62-inch full-HD+ AMOLED display with a refresh rate of 120Hz is included on the smartphone. It comes with a 4,500mAh battery and offers six months of Spotify subscription for free. As a follow-up to the 2020 OnePlus Buds Z earphones, the OnePlus Buds Z2 true wireless stereo (TWS) earbuds were also released. They are equipped with active noise cancellation (ANC). The OnePlus 9RT is priced at Rs. 42,999 for the basic 8GB + 128GB storage model and Rs. 46,999 for the 12GB + 256GB storage model in India. It will be available in Hacker Black and Nano Silver colour variants.

4. The Vivo Y21e has been launched in India with a Qualcomm Snapdragon 680 SoC and a 5,000mAh battery

On Friday, the Vivo Y21e was released in India. The Qualcomm Snapdragon 680 SoC powers the pocket-friendly smartphone. It has a 5,000mAh battery with quick charging and reverses charging capabilities. It has a 6.51-inch LCD Halo Full View Display with HD+ resolution (720×1,600 pixels). Other features include an Eye Protection Mode that filters out dangerous blue light and Face Wake, which unlocks the phone using facial recognition. The Vivo Y21e is priced at Rs. 12,990 in India for the single 3GB + 64GB storage variant Starting January 14, the smartphone will be available in the colours Diamond Glow and Midnight Blue.

5. Samsung has launched the Galaxy Tab A8 with a 7,040mAh battery and Dolby Atmos

On Thursday, the Samsung Galaxy Tab A8 was released in India. The Galaxy tablet has a 10.5-inch WUXGA 16:10 aspect ratio display and is powered by an unidentified octa-core CPU with up to 4GB of RAM. The Samsung Galaxy Tab A8 will be available in two versions: Wi-Fi alone and Wi-Fi + LTE. It has a large 7,040mAh battery with a 15W rapid charging capability. A quad-speaker arrangement with Dolby Atmos is included with the Galaxy tablet. The 3GB RAM + 32GB storage Wi-Fi alone edition of the Samsung Galaxy Tab A8 costs Rs. 17,999 in India, while the Wi-Fi + LTE variant costs Rs. 21,999. The Wi-Fi alone model with 4GB RAM and 64GB storage cost Rs. 19,999, while the Wi-Fi + LTE variant cost Rs. 23,999..It will be available in Grey, Pink Gold, and Silver colour options.

1.PS5 India Restock: Pre-Orders for the PlayStation 5 will begin on January 18th

On Tuesday, January 18, at noon, the PlayStation 5 will be back in stock in India. Along with Amazon, Sony’s online shop ShopAtSC has provided the updated resupply information. This is the first time the PlayStation 5 has been sold in 2022, and stores including Croma, Flipkart, Prepaid Gamer Card, Reliance Digital, and Vijay Sales are anticipated to refill the console on Tuesday. From February 8 forward, deliveries will begin. The basic edition of the PS5 costs Rs. 49,990, while the Digital Edition costs Rs. 39,990.

2. Safari 15 has a security flaw that might expose your browsing history

Safari 15 has been discovered to contain a vulnerability that allows unscrupulous actors to gain access to your browser history and possibly your identity. The problem arose as a result of a flaw in IndexedDB’s implementation, which serves as an application programming interface (API) for storing structured data. The vulnerability affects users of the most recent versions of macOS, as well as iOS and iPad OS. Although macOS users may mitigate the effect by switching to a third-party browser, iPhone and iPad users do not have this option at the time.

3. Google Meet is introducing live captioning and a companion mode for hybrid meetings

New features have been added to Google Meet to strengthen the hybrid work culture and make video sessions more effective. Google has begun to make live translated subtitles available for Google Meet. In Google Meet on the Web and on mobile devices, the new feature will automatically translate talks from one language to another in real-time. Additionally, on the Web, Google Meet will gain a new Companion Mode feature that will allow users to add remote members through an extra screen. Remote members can use the Companion Mode to access all of the advanced interactive features that members who are physically there can use.

4. All users may now record a session on Twitter Spaces, which will be available for public viewing

Twitter Spaces, a tool that allows users to host or participate in live audio discussions on the site, will soon allow all of its hosts on Android and iOS to record a session, which will be made public for a short period. Since the recording capability was released on October 28, this is the second big enhancement in this area. Twitter Spaces received a Podcast-like feature last month that lets all users on Android, iOS, and the Web listen to a recording of the platform’s talks. Additionally, while creating a Space on Android or iOS, touch the “Record Space” button to make it “accessible for public replay for 30 days after the Space has finished.”

1. Ptron Force X11 Smartwatch with 7 Sports Modes and SpO2 Tracking has been released in India

On Monday, the Ptron Force X11 wristwatch with Bluetooth calling was released in India. The smartwatch has a 1.7-inch square display with tiny bezels on all sides and is enclosed in a metal casing. The wristwatch also comes with heart rate monitoring, blood oxygen saturation (SpO2) monitoring, blood pressure monitoring, sleep tracking, and seven sports modes, according to Ptron. The IP68-rated Ptron Force X11 is supposed to have a battery life of up to seven days and can be completely charged in around three hours. The Ptron Force X11 has an initial price of Rs. 2,799 and is only available on Amazon. The smartwatch comes in two colors: Onyx Black and Pink Suede. Ptron is giving a one-year guarantee on its new smartwatch.

2. Boult Audio has released the AirBass Y1 TWS Earbuds, which have a battery life of up to 40 hours

On Thursday, the Boult Audio Airbass Y1 true wireless stereo (TWS) earphones were released in India. They have a battery life of up to 40 hours and offer quick charging. According to the brand, users may listen to music or accept calls on a single earphone with single-channel audio. The AirBass Y1 TWS earphones from Boult Audio have an angled shape. The wireless earbuds are also water and perspiration-resistant, with an IPX5 rating. The new Boult AirBass Y1 is priced at Rs. 1,299 in India. The TWS earphones will be available for purchase on Flipkart in two colour options: black and white.

In India, Sony has released the WF-1000XM4 true wireless stereo (TWS) earbuds. Sony’s premium earbuds are among the first to provide support for the LDAC advanced Bluetooth codec in a TWS form factor, as well as other crucial features like active noise cancellation and app integration. The new Sony WF-1000XM4 earphones are priced at Rs. 19,990 in India and will be available to buy starting January 16th, 2021, as a successor to the Sony WF-1000XM3 headphones.

On January 12, JBL Tour One wireless headphones were released in India. True Adaptive Noise Cancellation technology is included in the headphones. The Tour One headphones are Hi-Res Audio Certified and have features like Adaptive Ambient Aware and TalkThru. The headphones have a 25-hour playing time with noise cancellation enabled and 50-hour playback time without it & support voice commands on Amazon Alexa and Google Assistant. JBL Tour One is priced at Rs. 25,999 in India, according to the firm.

On Wednesday, the Sennheiser HD 450SE headphones were released in India. The German audio brand’s over-the-ear headphones provide active noise cancellation (ANC), a 30-hour battery life, and a Bluetooth v5 connection. Amazon Alexa connectivity and a dedicated voice assistant button are included in the new over-the-ear headphones. They have a small folding style as well. The Sennheiser HD 450SE will cost Rs. 14,990 at retail. They’ll be available only on Amazon starting January 16th & will be available in only black colour.

The Life Note 3 true wireless stereo (TWS) earbuds were released in India on Wednesday by Soundcore by Anker. Active noise cancellation (ANC), a Gaming Mode, and Bass Up Technology are all included. These earbuds, according to the manufacturer, may last up to 35 hours on a single charge. The earbuds have a discover feature that allows customers to locate their earbuds if they got misplaced. The Soundcore Life Note 3 earbuds are water-resistant to IPX5 standards. The Soundcore Life Note 3 TWS earphones are priced at Rs. 7,999 in India. The Soundcore by Anker earbuds come in a Black colour option and can be purchased on Flipkart.

On Monday, Delhi Chief Minister Arvind Kejriwal launched the city’s first electric bus service, ushering in a ‘new age of transportation. He also stated that the Delhi Transport Corporation (DTC) will be operating 300 more electric buses around the city by April of this year. “We plan to add 2,000 more electric buses in the future,” Kejriwal stated. The CM added that the new electric vehicles charge faster; they take 1-1.5 hours to completely charge and can go a minimum distance of 120 kilometres on a single charge.