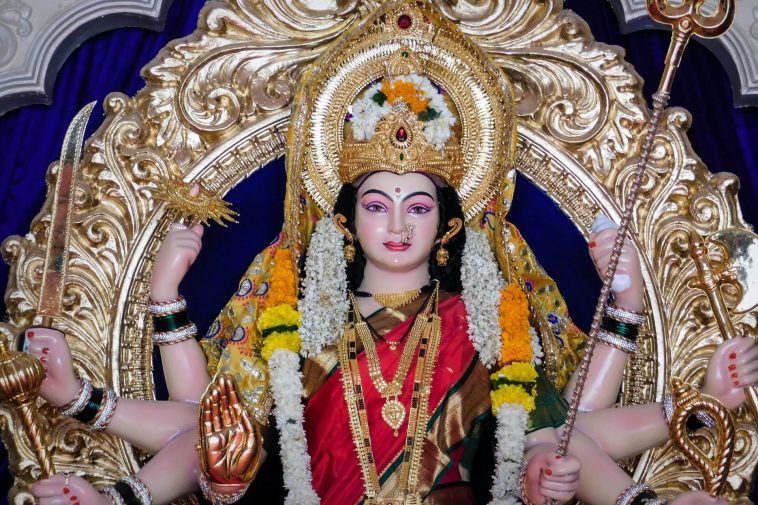 Photo by Sonika Agarwal on Unsplash

It’s October 7th today, which marks the first day of Sharad Navratri- the festival we all eagerly await, don’t we? Navratri begins the festive month leading up to Dussera and the Diwali. Navratri means “nine nights” (nava – 9, ratri – night).

Navratri is a 9-day Hindu festival celebrated in September- October. Navratri is observed in places all over India for different reasons however, ‘Sharad Navratri‘ is celebrated in honour of the divine feminine Goddess Durga. To give a little background, this festival is associated with the victory of Devi Durga against the demon king Mahisashura and the win of good over evil.

Each day is dedicated to Devi Durga where devotees observe a fast, perform a worship ritual called puja, and celebrate her nine avatars and power to the world. Here is a list of the avataras of goddess Durga and colours associated with each day:

The nine forms of Goddess Durga:

Pratipada, the first day commemorates the worship of Shailaputri (daughter – putri; mountains – shaila), meaning the Daughter of the Mountain king – Himavat. The embodiment of the power of Brahma, Vishnu and Shiva, she rides a bull and carries a trident and a lotus in her two hands. Yellow signifies joy and cheerfulness.

Bharmacharini means one who practices devout austerity. Goddess Brahmacharini, also an incarnation of Parvati, is worshipped on Dwitiya, the second day. On this day, the unmarried form of the goddess Durga, Brahmacharini is worshipped for emancipation or moksha and endowment of peace and prosperity. Green colour is associated with renewal, nature, and energy.

Tritiya, the third day is associated with the worship of Chandraghanta – she symbolises beauty and bravery. She is worshipped for peace, tranquility and prosperity in life. She has a ‘chandra’ or half moon on her forehead in the shape of a ‘ghanta’ or bell. Grey refers to the destruction of evil.

Goddess Kushmanda believed to be the creative power of the universe is worshipped on Chaturthi, the fourth day. ‘Ku-shm-anda means, ‘Ku’ = a little; ‘ushma’ = ‘warmth’; ‘anda’ = ‘the cosmic egg’. Orange symbolises the brightness, knowledge and tranquility.

Skandamata, the mother of Kartikeya is worshipped on Panchami, the fifth day. In this form, Goddess Durga is seen holding Lord Kartikeya in her right arm. The day depicts the strength of a mother when her child is in danger. White denotes calm, peace, serenity and purity.

Known as the warrior goddess, Katyayani is an incarnation of Durga. She is the most powerful form of Goddess Durga. The red colour represents the anger of the Goddess towards the enemies and fearlessness. Red symbolises passion as well as anger.

Revered on Saptami, the seventh day, Kaalaratri is the most ferocious form of Goddess Durga. Kaal Ratri (‘black night’) has a dark complexion, disheveled hair and a fearlessness posture. The Devi’s immense power is represented by the dark blue colour. Blue epitomises divine energy.

Mahagauri is symbolic of intelligence, calmness and peace. It is said that when Kaalaratri took a bath in the river Ganga, her darker complexion turned into fairness. Maha Gauri’s power is unfailing and instantly fruitful. Pink personifies compassion, purity, self-refinement, hope and social upliftment.

On the last day, Navami is in honour of Siddhidatri, who is believed to possess all the siddhis. Siddhidatri is an incarnation of Parvati, the wife of Lord Shiva and it is also believed that one side of Lord Shiva’s body is that of Goddess Siddhidatri. It is made up of two words ‘Siddhi’ means supernatural power and ‘Dhatri’ means the awarder. Purple denotes ambition and energy. 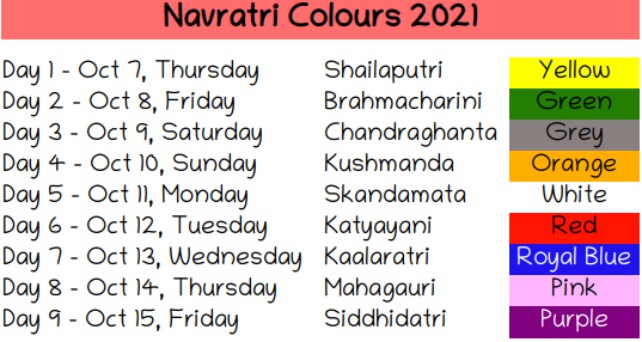 Devotees often fast for these 9-days in remembrance of the goddess. Owing to the current situation of the pandemic, this year grand celebrations will not take place, however, people often celebrate Navratri with a recitation of the legend, classical and folk dances, staging of Pandals, and chanting scriptures of Hinduism. The festival remains incomplete without the performances of Ramlila, where artists enact stories from the legendary text, Ramayana.

Needless to say, one of the main highlights of this festival is ‘Garba‘, which is a folk dance where hundreds and thousands of people gather in circles and dance to devotional songs, dressed in traditional attires. People dance with such fervour and energy, that it almost looks surreal. Unfortunately, Garba nights cannot be held this year, leaving us, especially our ‘Gujju fam’ missing it a little too much.

However, we hope this article took you a trip down memory lane and, you could relive those moments all over again. Wishing you all a blessed and wonderful Navratri!

From a mass communications background, I'm a fervent reader who often tries hands-on with writing. Films and music are my escape from reality, with a dream to make it big someday.