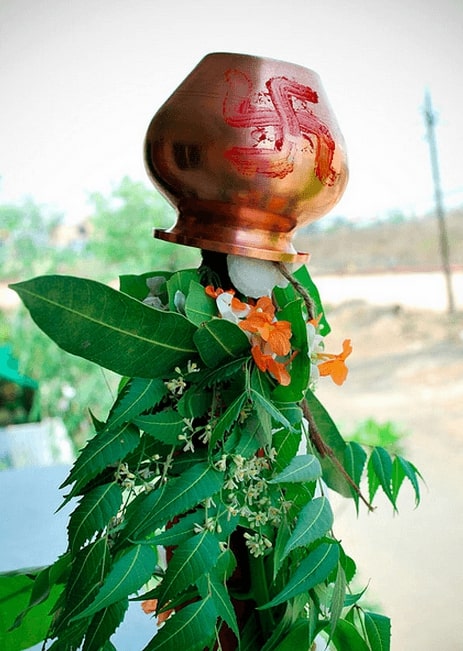 Chaitra Shukla Pratipada, best known to us as Gudi Padwa, is celebrated on the first of the Chaitra monthto mark the beginning of the New Year according to the lunisolar Hindu calendar. It also marks the arrival of spring. According to the Bramha Purana, this is the day Lord Bramha created the world after the deluge and time began to tick from this day forth. So, yes there are many reasons to celebrate this day and many traditions observed on this auspicious day as well. Here are the traditions:

With an ordinary bath, the raja and tama components decrease and the sattva component increases by the same amount for a duration of three hours. However, with an oil bath, it lasts for up to four to five hours. On this day, people rise early to take an oil bath.

People decorate their doorsteps with buntings of mango leaves and red flowers. Red flowers are used to decorate doorways because red colour is supposed to indicate auspiciousness.

People host the ‘mahashanti’ puja on this day. It begins with the worship of Bramha, as he created the universe on this day. He is offered ‘davna’ (a type of fragrant plant) during the worship. Later, a sacrificial fire and offering of oblations through the fire are performed, and offerings are made to Brahma. By performing the ‘shanti’, people are said to be cleansed of all sins, no new sins are generated, lifespan and wealth are increased.

The ‘gudi’, which is considered as a ‘Brahmadhwaj’ (Brahma’s flag) or a ‘Vijayadhwaj’ (victory flag) is hoisted in all homes on this day. A long bamboo shoot is covered with a green or yellow cloth adorned with brocade. Gaohi (a type of sweet), neem leaves, a twig of mango leaves and a garland or red flowers are tied to the shoot and it is covered with an inverted ‘kalash’. On Gudi Padwa, the waves consisting of the fire principle (tej tattva) and the creative Prajapati waves are activated on a large scale. The Divine consciousness emanated during sunrise, absorbed at that time lasts longer. Hence people worship the Gudi within 5-10 minutes after sunrise.

The spot selected for hoisting the gudi is generally towards the right side of the home entrance, as the right side symbolises the active state of the soul. The area selected for hoisting the gudi is cleaned, a ‘swastik’ rangoli is drawn and haldi-kumkum (turmeric and vermilion) are offered at the centre of the swastik to denote auspiciousness. The gudi is raised high, as a victory flag should be, and the ‘Shiva-Shakti’ principle in the universe is invoked while raising it. This enables all the constituents of the Gudi to accept divine principles.

People worship the astrologer or priest and listen to the religious almanac and their respective horoscopes for the coming year on this day as it is an auspicious day and could bring a lot of luck.

Since neem has the highest ability to absorb prajapati frequencies, on this day it is partaken of as an offering. People distribute Prasad by mixing together leaves and buds of neem with soaked split gram lentil, honey, cumin seeds and a little asafoetida amidst the chanting of a mantra. A specific mixture of neem and jaggery, which is called ‘bevu-bella’ in Karnataka, is eaten on this day to symbolise that good and bad or joy and sorrow must be accepted together. ‘Puran poli’s is also made on this day.

On this day, many farmers and other people as well plough the soil or strike the earth. Subtle soil particles get charged with prajapati frequencies and their ability to germinate seeds increases manifold. ‘Akshata’ (consecrated rice) is sprinkled on farming tools and oxen amidst chanting of the mantra which is known to generate prajapati frequencies.

Gudi Padwa is celebrated as Ugai or Yugai in Karnataka and Andhra Pradesh. It is celebrated as Nau Roz in Kashmir, Baisakhi in Punjab, Cheti Chand among Sindhis, Naba Barsha in Bengal, Goru Bihu in Assam, Puthandu in Tamil Nadu and Vishu in Kerala.

A writer insanely in love with writing...who knows and has no way other than to love writing as much as she does...enjoys flavours of food, experiences, stories and words....savors life and longs for complete abandon and surrender in everything! @postcards.and.love...